Find out about the life and work, professional positions, academic interests and major publications of the individuals who become presidents of the Society

His university education included a «licenciatura» in Education (with Honors), a «licenciatura» in History, and a doctorate in Philosophy & Arts (Education) (University of Valencia). He accomplished post-doctoral studies and research at Teachers College, Columbia University, and, holds a Master of Arts (Comparative Education & History) and a Master of Philosophy (History & Comparative Education).

From 1983 to 1986 worked as a policy-maker at the Ministry of Education & Science in Madrid, playing a leading role in the design of the new Spanish teacher educational policy and in the introduction of innovations in this field through multiple activities related to teacher training and the creation of the Spanish teachers centers. Representing the Spanish Ministry of Education & Science, he participated in various international activities and meetings organized by the OECD, the Council of Europe and other international organizations.

Between 1986 and 1992 he was the Editor of Revista de Educación, a theoretical journal published by the Spanish Ministry of Education & Science, and a most distinguished publication in the field of education in the Spanish speaking countries. And from 1994 to 2007, he was the editor of Educación y Conocimiento (Education & Knowledge), a series published by Ediciones Pomares (a printing press from Barcelona-México), in which outstanding scholarly works on postmodern social theory & education were published. Under his initiative Ediciones Octaedro, of Barcelona, one of the leading pub-lishers in the educational field in the Spanish speaking world, created in 2008 a specialized series focused on Educación Comparada e Internacional (Compara-tive & International Education).

In the period 1993-2008 he was Head of the Grupo de Investigación (Research Group) Políticas y reformas educativas (Educational policy and educational re-forms) of the Autonomous Government of Andalusia, in Spain. Under his directorship the Grupo de Investigación conducted during the period 1997-2001, a large comparative and socio-economic research project on Education Governance and Social Exclusion and Inclusion of Youth funded by the European Union (TSER EGSIE of the GD XII). He has also been member of various other international research groups. He was a DAAD Fellow as Guest Professor at Humboldt University (1997-1998), a Tinker Professor at the University of Wisconsin-Madison (1999), and a Senior Fulbright Scholar at the University of Indiana-Indianapolis (2000).

In November 2008, the Teachers College, Columbia University, awarded him the Harold Noah Award in International & Comparative Education created to recognize the merits of the brightest students who have gone through their studies on Comparative & International Education under the name of one of the most renowned specialists and creators of this scientific field. Prof. Pereyra is the first recipient of this award.

He organized many conferences and symposia including the XXII CESE Conference in Granada (2006) on Changing Knowledge and Education: Communities, Information Societies and Mobilities – The World in Europe, Europe in the World, and the CESE International Symposium on PISA under Examination: Changing Knowledge, Changing Tests, and Changing Schools in the Island of La Palma (2009) with the participation of twenty leading international scholars from Europe and North America.

Currently he is the co-editor of the series Comparative and International Education: a Diversity of Voices published by Sense Publishers (The Netherlands) and an active member of several editorial boards of Spanish and international journals, such as London Review of Education, Revista Española de Educación Comparada, Propuesta Educativa (from FLACSO, Buenos Aires), I Problemi della Pedagogia, and Archivos Analíticos de Políticas Educativas.

His interests are in the fields of comparative education and cultural and social historical theory applied to education, which are reflected in his writings. He has been published both in Spanish and English. His more recent publications include: 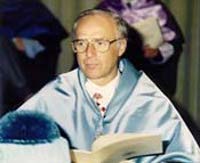 Born in 1937 in Azuaga, Badajoz (Spain), José Luis García Garrido is Emeritus Professor of Comparative and International Education at the the Department of History of Education and Comparative Education, Universidad Nacional de Educación a Distancia (UNED), in Madrid (National Open University).

After obtaining a Master Degree (Licenciatura) in Philosophy and Education from the Complutense University of Madrid, he worked for some years in a secondary school of Vizcaya, as a teacher and member of the governing board. In 1965 he went to Rome (Italy) to continue his studies at doctoral level and obtained in 1968 the PhD (Doctorado) in Philosophy and Education (Universidad de Navarra, Spain).

In 1969 he was appointed by the University of Barcelona (Department of Education), and shortly after, obtained his tenure as Associate Professor (Profesor Adjunto) of History of Education. One year later he was transferred to the newly-created Autonomous University of Barcelona, where in 1971 he obtained, through a national and open competitive examination, the post of Full Professor (Catedrático).Between 1972 and 1974 he occupied different positions in the Spanish Ministry of Education and Science, in Madrid: the post of General Deputy Director for Universities and the post of General Secretary.

In 1974 the Director-General of UNESCO appointed him as International Project Director in Buenos Aires (Argentina).

In 1978 he rejoined the Autonomous University of Barcelona, continuing his relationships with UNESCO as a consultant. In 1981 he moved to the National Open Univesity (Universidad Nacional de Educación a Distancia) as Head of the Department of Comparative Education and History of Education. Between 1987 and 1991 he served as Vice-Rector for Academic Affairs in the University. The University of North Carolina at Chapel Hill and Duke University (USA) appointed him as Visiting Professor during the academic year 1991-92. Between 1996 and 1998 he was Director of the National Institute for Quality and Evaluation (Instituto Nacional de Calidad y Evaluación, INCE), at the Spanish Ministry of Education and Culture. From 2002 to 2003 he served as the President of the School Council of the Autonomous Community of Madrid. From 2005 to 2006 he was Visiting Professor of the University of Houston and the University of Texas at Austin.

During all these years, he collaborated with many international organisations (UNESCO, OECD, Council of Europe, IEA, etc.), as well as with many Spanish organisations devoted to the evaluation of teachers, programmes and school and university institutions (ANECA, ACAP, etc.).

He has visited a great number of countries all over the world to study their educational systems, to elaborate studies, tasks of evaluation and reports for international organisations and research institutions, to advise governments, to participate in international conferences and congresses, and to deliver lectures. Elected Vice President of the Comparative Education Society in Europe (CESE) in 1981, he became its President in the period 1985-1988. He was also President of the "Sociedad Española de Pedagogía Comparada" (now Past-President), and a member of the World Council of Comparative Education Societies (WCCES). He belongs to several other international and national academic associations, as well as to the editorial advisory board of several international and Spanish journals and reviews. He has also been the director of several major educational journals, and at present he is the Editor of the Revista Española de Educación Comparada (the Spanish Journal of Comparative Education).

He is a member of the Academia Scientiarum et Artium Europaea (with its headquerters in Salzburg, Austria) and he has received several awards and distinctions, such as the Gran Cruz de Alfonso X el Sabio (Spain) and the Chevalier de l’Ordre de Leopolde II (Belgique).

Among his books, the following could be pointed up: